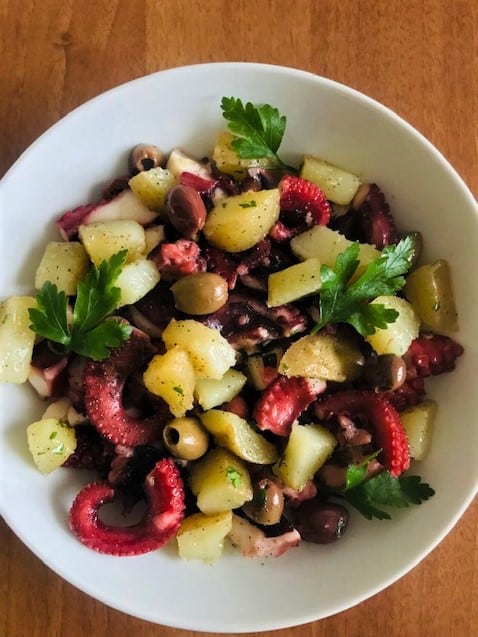 Insalata di Polpo e Patate, is a classic Italian starter that you will also find very often on the menus of Italian restaurants. It is basically a summer dish that can be eaten cold or even lukewarm. We also added some olives.

This is a dish from southern Italy, with Sicily and Campania competing for its paternity, but it is widespread throughout Italy.

It has to be said that octopus can be a bit tricky to cook because of the possibility of it becoming chewy rather than soft.
It’s not so difficult to cook, just need to take a few advices.

In a pot with cold water add a couple of bay leaves and juniper berries or possibly just a carrot, an onion and a stalk of celery. Bring to the boil, do not add salt and holding the octopus by the head, dip and remove the tentacles 2 or 3 times for a few minutes until they have curled up. Now immerse the octopus completely in the water, cooking over a low heat lid-covered for about 40 minutes.
Stick it with a fork to check if soft.
Once cooked, let it cool in its own water.

Cut potatoes into chunks, boil them in plenty of lightly salted water, then drain and let them cool.

In a bowl pour the oil, a pinch of salt and pepper, finely chopped parsley and the olives if you like, mix.

Cut the octopus into pieces when it has cooled.

Combine the chopped octopus with the potatoes and seasoning in a large soup plate or salad bowl, mix and serve or refrigerate to serve cold.

You can also prepare the octopus and potato salad using frozen octopus, simply cook it in boiling water while still frozen. 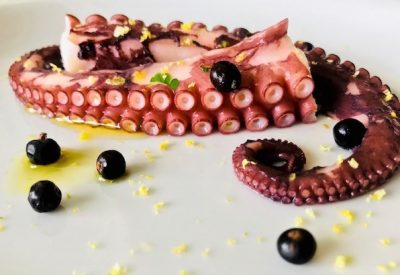