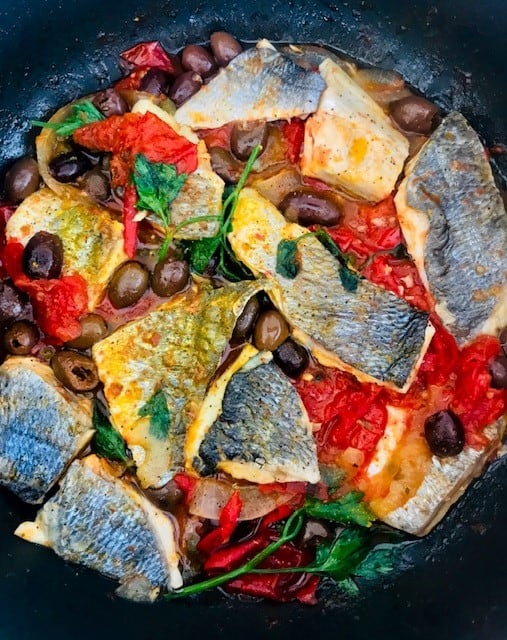 Sea Bream Fillets with a Mediterranean and Oriental flavour, a combo I have been experimenting and I liked it very much. I used fillets of sea bream already sold filleted for convenience. They cook in a short time, a perfect recipe for combining convenience and taste.

The olives are Ligurian Taggiasche or Taggiasca, small black pitted pearls. What does ‘Taggiasca’ mean? The name ‘Taggiasca’ comes from Arma di Taggia, a medieval town in the province of Imperia, western Liguria.

Garam-Masala is a mix of oriental powdered spices generally with white and black pepper, cinnamon, coriander, cumin, cardamom, cloves and nutmeg in varying proportions. Other spices can be added to your liking, thus I have added turmeric as well.

This kind of combination of flavours is not that unusual after all. Just think of Sicilian swordfish where the fish is seasoned in a similar way with cherry tomatoes, onions and olives, plus raisins and pine nuts sicilian-swordfish

Heat 2 tablespoons of EVOO in a non-stick frying pan and fry the thinly sliced onion for 2-3 minutes, then let it wilt gently adding the small glass of warm water, cover with a lid. Now add the tomatoes (whole or halved), the Taggiasche olives (I recommend keeping them whole as they are pretty small), a tsp of capers, the parsley, a pinch of salt, stir, then a teaspoon of Garam-Masala and a pinch of turmeric, stir again and cook for 5 minutes over medium-high heat.

Now it is the turn of the sea bream fillets to be placed in the pan, let them cook quickly for a couple of mins on both sides letting them flavour by sprinkling them with the sauce. 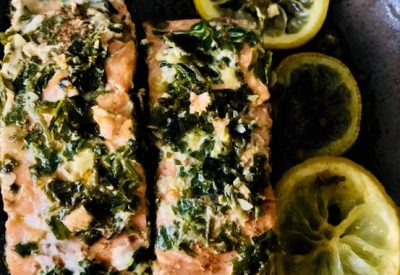 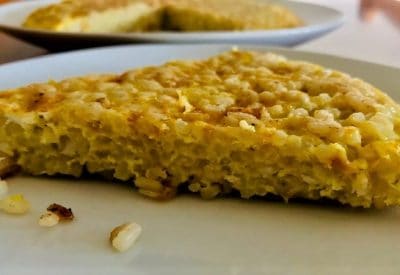