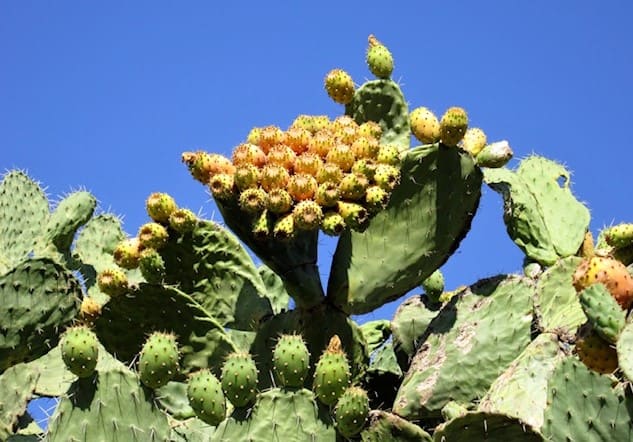 Prickly pear is a plant native of South America, brought to Europe by Cristoforo Colombo. In Italian they are called ‘Fichi d’India’ – ‘Indian Figs’.

What does India name have to do with them since they come from South America?
When Cristoforo Colombo discovered the New World, he was actually convinced that he had arrived in India. That is why the name refers to it.

Where does it grow in Italy?

In Italy, this plant grows luxuriant and happy in Sardinia, Sicily, Calabria, Puglia, Lazio and even Liguria. Today there is no region of Central and especially Southern Italy that does not have them, we can say that it is for all intents and purposes a Mediterranean plant. It also embellishes the landscape with their shovels and their fruits so colorful.

In fact, it is widespread in the hot and sunny areas of Italy, it can be found on stony cliffs and its fruit is an excellent summer fruit with purifying and refreshing effects. It belongs to the Cactus family, in fact it looks a lot like it.

What about its fruits?

Prickly pear fruit is recommended for the Mediterranean diet.

One would never think so, yet prickly pears are largely rich in vitamins, especially vitamin C and minerals including potassium, magnesium, calcium and phosphorus. They also contain many fibres which help against the problem of constipation; obviously we are referring to the ripe fruit, while the unripe one has an astringent action. Furthermore, prickly pears increase the sense of satiety, are low-calorie fruits and are useful for absorbing less fat and sugar while keeping glycaemia and overweight at bay.

They favour diuresis, help to eliminate toxins and excess liquids and are a precious source of antioxidants, those substances useful to our body to fight free radicals and the consequent cellular ageing.

How to pick up them?

Never pick them with your bare hands, the thorns are not only on the big green shovels but also on the skin of the fruit despite the fruit have already been cleaned from the big thorns. Removing them is difficult because they are small and invisible, but you can feel them!
The technique of prickly pear pickers (so expert people) is also to use very thick and long gloves and a knife. It’s better to buy the ones already packed, but don’t even touch the ones with your bare hands.

How to peel Prickly Pear ?

As we were saying, certainly by paying attention. One of the characteristic aspects of prickly pears is the presence of small but insidious thorns even on the fruit. Thus hold the prickly pear in place with a fork, then cut with a knife the two hard ends and cut the length. Then let it “roll” on its own skin. Remember to rinse the fork which you held it with, better not to risk having done this work and then find some thorns on the tines of the fork.

Excellent in fruit salad or as a mid-day snack or breakfast paired to a low-fat yoghurt. You can also make jams and savoury recipes such as risottos. Or make as for Sicilian bloody oranges : spiced-sicilian-blood-orange-salad/