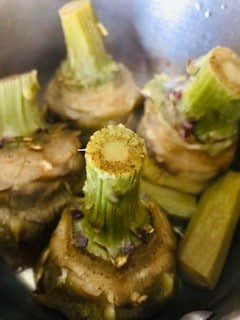 For this preparation is normally used a typical artichoke coming from Rome called “mammola”, but of course you can use artichokes you have available, taste doesn’t change. Stuffed with minced parsley, garlic and mint, carciofi alla romana is one of the most typical Roman side-dish.

Every year in April in Ladispoli, a town about 40 km from Rome, a culinary event takes place in April, called ‘Sagra’ dedicated to the artichoke. ‘La Sagra del Carciofo di Ladispoli’ – The Artichoke Festival of Ladispoli, is an event born in 1950 and year after year has been a crescendo of success and public.

Roman artichoke has received the IGP (Indication of Protected Origin) denomination based on many recipes of the traditional Roman and Lazio cuisine.

Clean artichokes making sure to take off all the woody parts and the little beard in the middle, helping you with a spoon.

While cleaning them, put them in a mix of water and lemon juice, to prevent they blacken.

Mince parsley along with mint and garlic.

Stuff each artichoke with chopped garlic, mint and parsley, season them with salt and pepper, place them upside down in a deep pot and pour about 3ml of EVOO and just enough water to cover the base of the artichoke, by leaving outside the stem.

Cover with a lid that will allow the steam to cook and simmer for 15 to 20 minutes. Check the cooking with a toothpick or fork.

Let them cool down inside the cooking liquid or eat them hot. 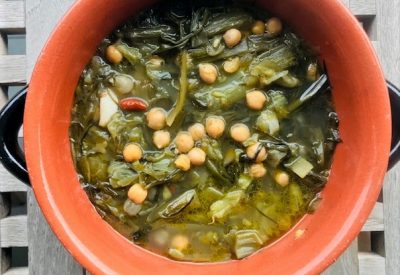 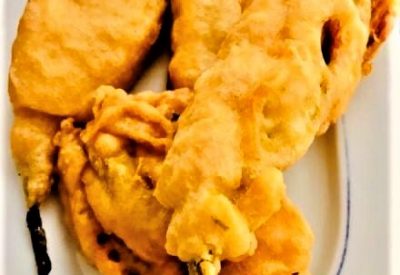